Because of their distinctive elytral patterns in striking black and yellow ("aposematism") or muted earth tones ("crypsis"), species of the longhorned beetle genus Megacyllene Casey (Cerambycidae: Cerambycinae: Clytini) are popular with collectors.

In past Fall seasons, I have serendipitously encountered a few specimens of this beautiful species, Megacyllene robusta Linsley & Chemsak: 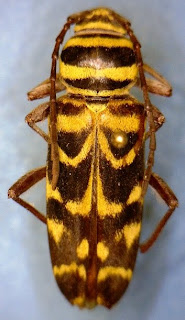 Megacyllene robusta
Linsley and Chemsak
Female
Admittedly, collecting longhorned beetles (Cerambycidae) isn't exactly my milieu. Yet, I challenged myself to make an effort to collect more of a series of this and other local Megacyllene this Fall. Hopefully, along the way, educating myself a little about their bionomics and distribution.

From my field notes of prior specimens (3), M. robusta adults were collected in late morning to early afternoon in late October. One locality, where three were found, is a service station surrounded by Mesquite/Grassland at 4166 feet elevation. One beetle was found on a sunny white wall and two others around the gas pump islands. Anecdotally, other species of Cerambycidae are known to be attracted to petroleum distillates. One that immediately comes to mind is the Banded Alder Borer, Rosalia funebris Motschulsky, which is commonly attracted to volatiles of freshly painted buildings and creosote-treated utility poles. Agreed, my inference that M. robusta may be similarly attracted is pure speculation.

In southeast Arizona, there are two other temporally and geographically sympatric species: M. antennata (White), and M. snowi snowi  (Casey). 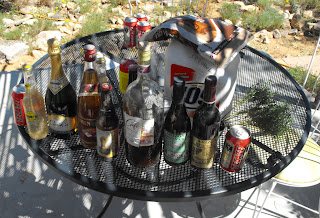 Megacyllene antennata (White)
Female
Fermenting bait traps have long been employed to collect a wide variety of beetles, especially scarabs and longhorns. Often they will attract species otherwise difficult to obtain. There are probably as many "bait" variations as there are insects attracted to them. A veritable cornucopia of ingredients, and combinations of, have been used including cheap wine, stale beer, vinegar, brown sugar, molasses, rotting fruit, and denatured alcohol. Essentially, the bait is poured into a plastic container, usually a 1-gallon juice or water jug, modified by cutting out large openings on the sides. Beetles, and other insects, attracted to the fermenting cocktail, enter the trap and drown in the liquid. (Above, my collection of raw "bait" materials). 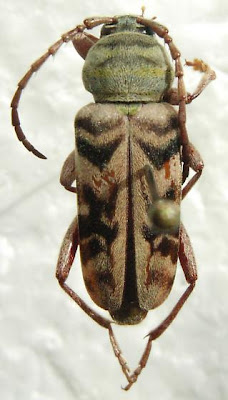 Bring 12 oz. dark molasses or 1 lb. brown sugar and 12 oz. beer, wine, or similar libation up to 1 gal. with water. Add a packet of active dry baker’s yeast to get the fermentation process started and mix well.

For best results, hang the trap in a tree or suitable shrub along the edge of forest borders. Traps placed inside forests or stands of vegetation usually yield smaller amounts of beetles but possibly different species.

Add 1-quart of fresh liquid. Generally, it will take 2-3 days for the liquid to start fermenting and become attractive. It will remain so for about another week.

Check traps every 2-3 days by pouring the liquid bait through a fine kitchen strainer into another container. Reuse or replace the liquid as necessary. A can of beer or other alcoholic beverage can be used to replenish the liquid to a suitable level.

Collected specimens should be washed in water to remove bait residue.

Here then, are my trap localities in the Sulphur Springs Valley, Cochise County ... 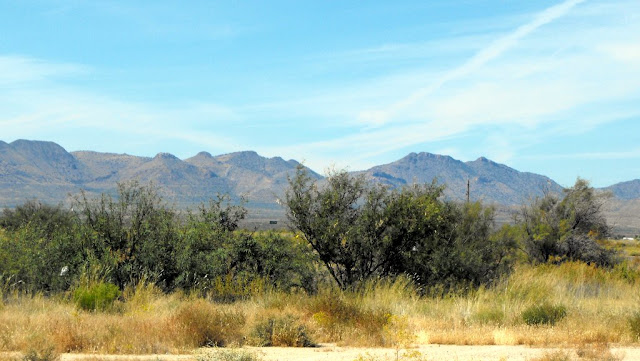 Above. Locality 1. This is the locality mentioned above at 4166 feet elevation . The area has been slightly impacted by automobile and diesel traffic and light construction. The original expanse of mesquite has been curtailed to just a few acres. Five traps were placed here.

Below. Locality 2.  Upper Sonoran mesquite/grassland at 4185 feet elevation. The area is being utilized as open range. Three traps were placed here among many large stands of old growth mesquite. 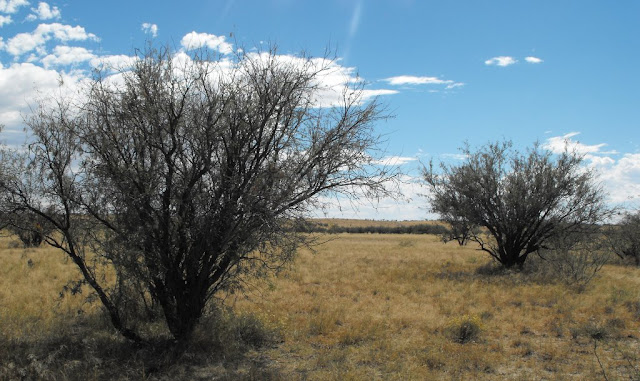 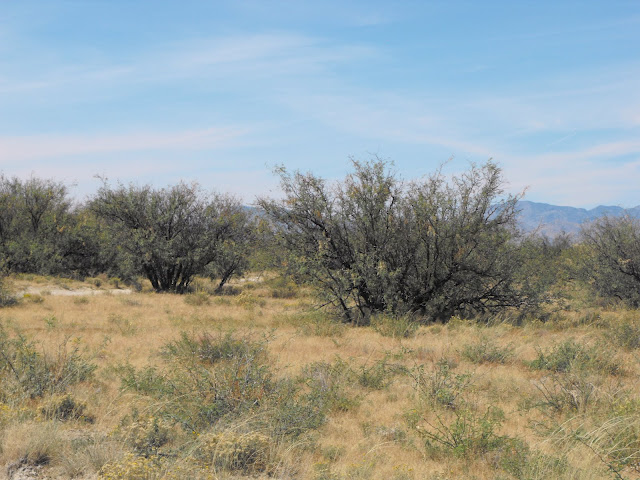 NOTE: All sites are on private property. I have been granted permission to conduct my trapping activities by the property owners with the caveat that I keep specific locality information discreet.

Internet Resources
Megacyllene antennata, M. snowi snowi photos courtesy of  A Photographic Catalog of the  Cerambycidae of the New World 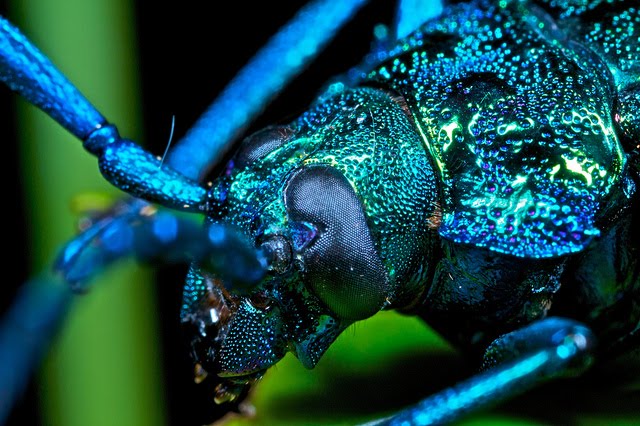 Some of the finest photography of invertebrates, mammals, other related subjects, and breathtaking scenery is published in the adventure blog "Rainforests" by Paul Bertner. 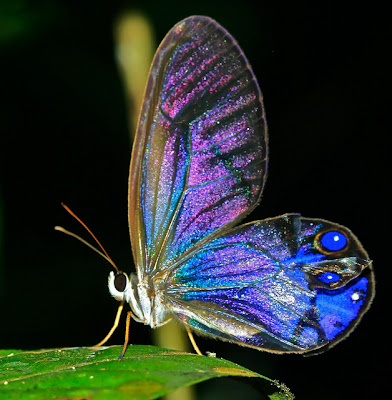 Tigers in the Yard

I was pleasantly surprised to find several of these tiger beetles,

around my patio light. It occurred to me that this was rather late in the season for them as this subspecies is common in July and August in response to the summer monsoon. In addition, there hasn't been any trace of rain in over two weeks, though, there are a few puddles from prior storms.

This subspecies is endemic to the Sulphur Springs Valley of southeast Arizona where it is associated with wet saline flats. It's coloration varies from bright green, blue or purple.

This voucher specimen documenting it's late temporal activity, I'm afraid, is a bit worse for wear ... and my poor photography doesn't do it justice. 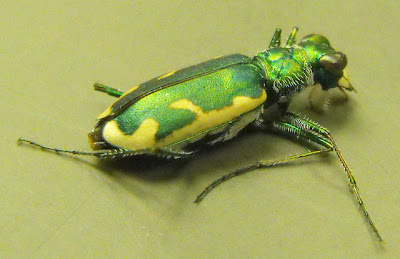 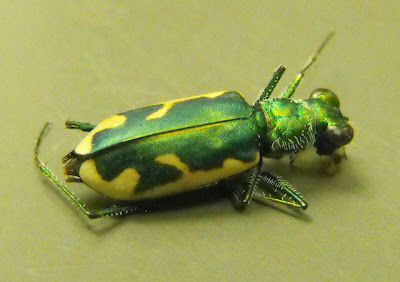 Here is the series in my cabinet ... 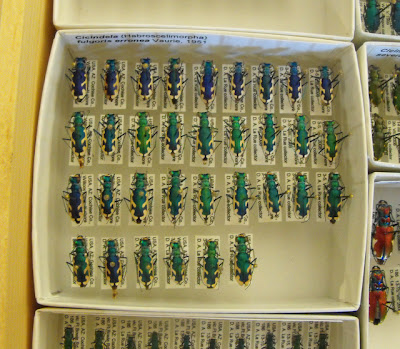 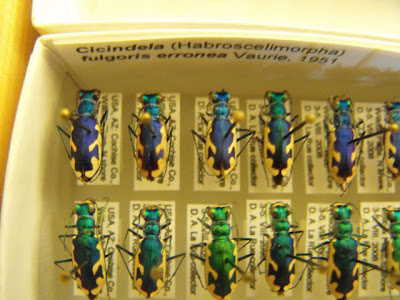 The Patron Saint of Tannu Tuva:
~ Richard Feynman ~
"The Pleasure of Finding Things Out"


Richard Phillips Feynman, (1918-1988), was an American theoretical physicist. For his contributions to the development of quantum electrodynamics, he jointly received the Nobel Prize in Physics in 1965. He participated in the Manhattan Project assisting in the development of the atomic bomb and was chosen as a member of the panel that investigated the Space Shuttle Challenger disaster of 1986. It was his investigations that singled out the effects of freezing temperatures upon the shuttle O-ring seals - which ultimately proved to be the colloquial "smoking gun."

His ability to articulate complex scientific principles and concepts in an informal, comprehensible style significantly inspired and impassioned my journey as a scientist, naturalist and entomologist and my quest to understand the veil of nature.

"Nature uses only the longest threads to weave her patterns, so that each small piece of her fabric reveals the organization of the entire tapestry."

~ Richard Feynman, Transcript of the Messenger Lectures at Cornell University, presented in November 1964. 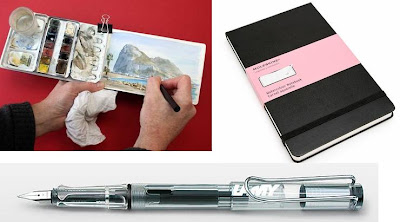 My watercolor Moleskine and Lamy Safari 'Demonstrator' fountain pen with F-nib and blue-black ink.
No comments:

This is the rain beetle I had the privilege to name for Frank.


"... From so simple a beginning, endless forms most beautiful and most wonderful have been, and are being, evolved."

~ Charles Darwin, On the Origin of Species by Means of Natural Selection, 1859. 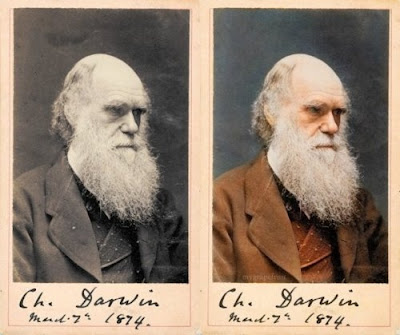 It's been over 150 years since Charles Darwin published On the Origin of Species. Yet, his ideas remain as central to scientific exploration as ever.